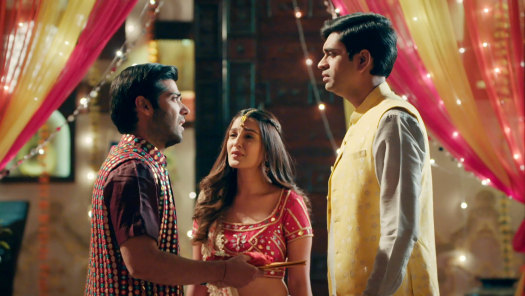 At the beginning of the episode, doctors inform the Pandya family that Dhara’s life is in danger. Gautam decided to terminate the pregnancy. Suman shouted at Gautam and asked him to talk to Dhara for this. Dhara was unconscious so Gautam asked doctors to terminate the pregnancy. Doctors did the same. After a few hours, Dhara gets conscious. Dhara read a file and get to know that she is no more pregnant, she gets shocked and asked everyone to go home. Dhara arrived at the Pandya residence, while Suman was collecting all the toys. Suman prays to God to keep Dhara away from evil eyes. Dhara was going towards the kitchen to prepare food for everyone, suddenly Suman stopped her.

Suman started crying. Everyone arrived at Pandya’s residence. Rishita and Raavi asked Dhara not to get worried about anything. Dhara didn’t listen to anyone and decided to clean the house. Suman asked Dhara to take a rest, but she ignored her and went upstairs. Gautam and his brothers started crying because Dhara is in shock. Suman said no one will understand Dhara’s pain and asked everyone to keep eye on her so that she can’t do something wrong. Gautam get water for Suman. Suman slapped Gautam and shouted at him for terminating Dhara’s pregnancy.

Suman said if Gautam would have informed earlier about Dhara’s pregnancy complications then Dhara don’t have to terminate her pregnancy and she leaves from there. Gautam said he wanted to save Dhara’s life that’s why he terminated the pregnancy. Gautam asked everyone to handle Dhara. Gautam and everyone started collecting toys. Gautam found a doll and started crying vigorously. On the other hand, Rishita’s boss called Kamini and informed her that Rishita knew about their meeting. Rishita’s boss said he has managed everything. Kamini asked him to work according to their plan. Rishita’s boss said the Pandya family will not able to complete construction work on time and that’s why they will get interested for their money.

Later Dhara was calculating the expenditure of the Pandya family on Diwali. Gautam arrived in his room and apologized in front of Dhara. Dhara ignored Gautam. On the other hand, Shiva and Raavi was working in the kitchen together. Raavi asked what Shiva want? Shiva said he only want Dhara to be happy again. Anita arrived at her home late at night. Prafula asked where she was? Anita informed Prafula that she went for shopping because she is happy. Prafula shouted at Anita. Shiva asked Raavi to prepare tea for Dhara. Dhara recognized everything about her pregnancy.

Upcoming Story: Dhara shouts at Gautam and blames him for her baby’s death.