At the beginning of the episode, Shiva arrived in the room. Raavi started shouting at Shiva and said she knows that he will come to disturb her. Shiva started shouting back. Dhara and Gautam listens to the argument. Gautam was going to stop them, but Dhara said they cannot came in between the husband and wife. Dhara said they both need to understand that they are now in a married life and has to learn to live with each other. Raavi told that she already knew that Shiva wants to marry her and destroy her life. Shiva said whatever Raavi thinks, it does not bother him. Raavi said Shiva will not sleep in the same room. Shiva fights with Raavi. Dhara was thinking about the marriage and was upset. Gautam arrived with the food, Dhara refused to eat but Gautam asked her to eat and feed her. Gautam shows gratitude towards Dhara and told thank you to Dhara for helping him in every situation of his life. Gautam said without Dhara’s help nothing was possible. Gautam and Dhara shared a good time with each other.

Prafula wakes up Anita at the midnight. Anita asked her to go back to the room. Prafula said Anita was murmuring Hardik’s name while sleeping. Gautam said Dhara always thinks about his brothers and family. Dhara said she also thinks about him too that’s why she is with him in every situation of life. Prafula asked Prafula to invite Hardik for breakfast. Anita said she had done everything but now she can not love Hardik.

Janardhan was thinking about Ishika’s marriage. Janardhan’s elder sister asked Ishika’s mother to pretend as she is seriously ill and inform about these to Ishika also. Janardhan’s elder sister said Ishika will get back to her home then they will capture her. Raavi laughs at Ishika and said she Ishika had not enjoyed her first night. This was Ishika’s imagination. Janardhan ordered goons to kill Dev and Shiva. Ishika disturbed her makeup and outfit so as to show that her first night was awesome. Raavi made tea for everyone. Shiva asked for the tea. Dhara said Raavi made the tea. Shiva refused to have the tea and left the kitchen.

Dev wakes up and came out of the room. Everyone saw lipstick’s sign on his chick and neck. Dhara asked Dev to take bath first. Dev did not know that he has lipstick sign on his cheek. Dev saw that when he gets inside the room and started shouting at Ishika. Ishika and Dev get romantic. Prafual asked Anita to caught Anita in the trap. Anita called Hardik while he was in Pandya’s house. Hardik goes to meet Anita.

Raavi was opening all her marriage gifts. Dhara came and ask Raavi to get ready and offered a saree. Raavi started crying. Dhara said she needs to clear the past memories from her mind and move on. Raavi said she does not understand what is happening in her life and started crying again. Dhara supported Raavi. 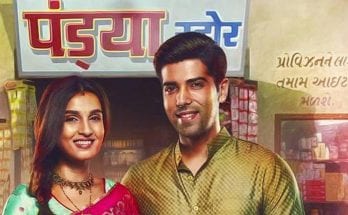