Last week we saw Dhami forcibly hugging Aarav. Gitanjali Devi arrives there and sees them together. She enters the room and asked what’s going on here? She asks Dhami why she wore Simar’s clothes. Before Dhami could say something Gitanjaali told him that no justification would prove her right. Gitanjali Devi told Aarav to make her understand that there are some limits that she shouldn’t cross. Gitanjali Devi told Dhami to change the dress as Siamar’s stuff will be her only. Reema went to Simar and informed her that they both went with Dhami somewhere. She was getting angry at Dhami. Aarav stops in front of an ambulance and says surprise. Simar was telling Reema not to worry she is just a guest. She tells Reema that she believes Aarav very much. Reema says she is innocent and that Dhami is too clever. Simar says fine she will talk to them.

Samar says this is not a hotel it’s his workplace. Aarav says he came to hear her recording. Samar said there are many mistakes that need to be corrected. Aarav says he can’t talk in this way to him. Samar asked Aarav to leave his workplace. Simar says he can’t insult her husband and there is not mentioned that she can’t bring her family members. Aarav and Simar went to Gitanjali Devi to talk about something important. She told them we wit talk later. Suddenly Naryan came with Shagun. Gitanjali Devi says today only Gagan will marry Aditi. Avinash says he also eagerly waiting yot take Aditi. Gitanjali Devi asks everyone to get ready.

Aarav was ready and came out of his room. He was willing to meet Simar but Reema took him away from there. Suddenly someone hits on Siamar’s head. Simar fell to the floor unconscious. Samar say’s he is doing all this to save her from Aarav. Oswal and Narayan were praising Simar. Gitanjaali Devi ask Reema to check if Simar is ready. Reema says she is there. Aditi was coming downstairs with Simar. Everyone was happy to see the bride. Aarav says he wants to see her face. Reema didn’t allowed Aarav to remove the veil.

Aarav marrying Dhami. He was not aware that he is getting married to Dhami. Simar reached Oslwal’s mansion screaming Aarav’s name. Aarav was about to fill Sindoor lights went off. Dhami pulled his hand and puts Sindoor on her forehead. Aarav was a little shocked. Suddenly Simar came inside and screamed Aarav’s name. Everyone was shocked to see Simar. Dhami tells Simar to leave him as he doesn’t want to go anywhere. She asked Simar to leave because she is the second wife of Aarav’s life. Dhami said she is the official first wife of Aarav. Simar warns her not to speak anything because she is his only wife. Reema says we are not interested in her bullshit she can leave now. Dhami asks what if she proves that she is the only first legal wife of Aarav. Simar look’s at Aarav

Simar said Aarav to look into her eyes and say what’s the truth. Aarav said she is right he already married to her. Simar stand stunned in front of Aarav. Gitanjali Devi slapped Aarav. Dhami, ask why they are not accepting the truth and dragging Simar out of the house. She asked Aarav to throw her out she can’t resist her. Gitanjali warns Dhami for screaming like this. Dhami was leaving with Aarav but Gitanjaali Devi told her that she won’t be able to take Simar’s place in any birth.

Dhami and Aarav came into the room. She intentionally fell into his arms and Simar came inside the room. Aarav feels a little shy. Dhami scolds Simar for coming inside the room without permission. Simar says she also came in ger life like this only. Dhami said everything belongs to her only she only came in between. Before Simar could say anything Aarav told her to leave the room. Simar was staring at Aarav shockingly. Dhami asked Simare to leave quickly. Dhami screams at Simar and told her that she is not his wife. Before they get into an argument Aarav hugged Dhami from the back. Simar was surprised to see this. Dhami says if she is hurt then why she doesn’t leave this room. Simar says she doesn’t fear because Aarav us with her. Aarav took Simar out of the room and closed the door.

What Simar will do next?

This was the weekly summary of your favorite show “Sasural Simar Ka 2”.

Stay tuned with us for more detailed written updates. 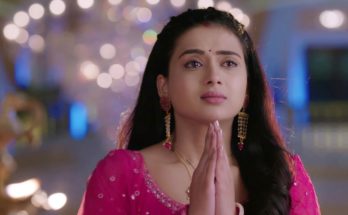