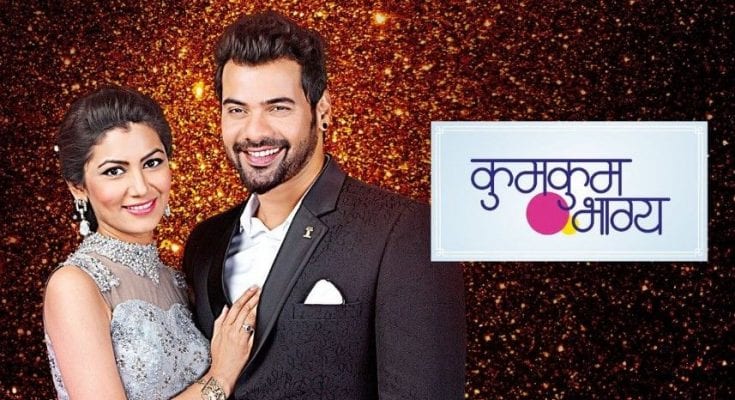 At the start, Pragya looks back on the road from the car, she finds that killer is close to them, she informs this Abhi, and when she puts on her spectacles she finds that the killer is very close to them, so she, again and again, tells Abhi to drive the car fastly. To confuse, killer Abhi takes a different turn on the road. There in Abhi’s house, Dadi, Sarita and Purab Prays to hawan kund, then Purab finds that the curtain beside him has caught fire, so he puts his coat on fire to stop it, then Aliya comes there and she puts some water on hawan kund by seeing this Pandit ji says to Aliya that “ you shouldn’t do that, because of this now Pragya could get in a serious trouble ”, Aliya by listening to this from Pandit ji says to herself that “ if I know this before, I could have thrown gallons of water on hawan kund ”.

There in the car, Pragya praises Abhi’s decision of taking a different turn, she tells Abhi to stop the car, Abhi stops the car and Pragya gathers some stones from the road, Abhi asks Pragya why are you doing this, to which Pragya tells Abhi that these stones are for killers. Then they both sit in the car, and Abhi drives the car, Pragya says to Abhi that “ you know my focus is very strong, I used to throw a stone on mango tree to gather raw mango for Prachi ”, to which Abhi says to Pragya that “ I want to give the love back to Prachi which she deserves ”, to which Pragya says “ yes you will but there is one more person who loves Prachi more than us, and that person is none other than Ranbir, I have accepted Ranbir’s relationship with Prachi also ”, to which Abhi says to himself that “ if Ranbir and Prachi both love each other then I will let them both marry ”, Abhi also gets flashbacks of Riya, to which Pragya says to Abhi that “ why you are so tensed ”, to which Abhi says “ I was thinking that Ranbir loves Riya before this and Riya also loves Ranbir ”, to which Pragya says to herself that “ if Riya and Ranbir love each other then I will let them marry ”. After some time Pragya sees that the killer’s car is chasing them, so she throws stones at killer’s car, Abhi makes fun of Pragya’s throw, and he tells Pragya to drive the car, Pragya and Abhi changes there sits, then Abhi takes out a gun and he fires that gun on killer’s car, Pragya asks about that gun from Abhi, Abhi says Pragya that “ this gun is robbed by me from killer’s house ”, to which Pragya tells Abhi that you are a robber. The main killer gets a phone call so he stops his car, by seeing this Abhi drops his gun on the road, Pragya again asks Abhi why did you drop that gun, Abhi feels irritated by questions of Pragya.

From the phone call, Killer’s brother says to the main killer that “ our partner Snake has killed my wife and our mother is crying a lot ”, killer’s mother says to the main killer that “ you have to kill both husband and wife to take revenge for my daughter-in-law’s death ”. After listening to this the main killer gets angry and now he drives the car. One of the injured Policeman calls Purab and he asks about Abhi from Purab, to which Purab says “ Abhi has checked in a hotel ”, to which Policeman says to Purab that “ you check Abhi’s credit card bill, and you should search for him on the highway because the killers are behind him ”, then Policeman cuts the call. Purab orders Aliya to bring Abhi’s wallet, Aliya brings Abhi’s wallet, and Purab finds that all cards are in that wallet, so he decides to find Abhi and Pragya, after seeing Aliya, Dadi and Sarita also going behind Purab.

Meanwhile, when Pragya is driving the car, she gets anxious and she puts her leg on the accelerator instead of the brake, so the car gets out of control, then Abhi pulls handbrake of the car before any accident, then Abhi insults Pragya’s driving, Pragya gets angry on Abhi and she moves out from the car, Abhi convinces Pragya again to sit in the car, and then they both sits in the car, suddenly killer’s car in front of them, Abhi drives his car fastly. After some time Abhi and Pragya both think that the road will end because of the cliff, so they both hold hands with each other. {Episode Ends}

Ace tarot card reader Dr Neelam (Kaajal) tells us what the cards say for these celebrities!

I am very angry at Abhinav and so proud of Aly: Jasmin Bhasin

Meera Deosthale: I know, I am not extraordinarily beautiful

Sudhanshu Pandey on role in Fitrat: Have never had such a look before, glad people loved it!