The Tuesday episode starts with Anupamaa trying to finish her office work. She has received a new laptop and new phone from work, and she decides to send Anuj a text that she has completed her pending work. Then she gets on to fixing Baa and Babuji’s wedding outfits when she hears someone banging at the door. It was Anuj who had rushed to her home after receiving a text from her which read “Bachao”. Anupamaa tells him that she had messaged him “Ho gaya”. The duo have a good laugh. Later, Anuj tells her that he knows he can’t become a part of the celebration but he wants to help Anupamaa and helps her in fixing Babuji’s kurta.

Meanwhile, at the Shah house Kavya and Vanraj’s argument continues and Vanraj goes to sleep outside. But before leaving he tells Kavya to not create any issues or drama during the anniversary celebration otherwise, she will see the worst side of him.

The next day, the kids are busy decorating the house when Anupamaa comes. She requests Vanraj if she can stay over till the mehndi ceremony and Vanraj tells her that it won’t be a problem and neither Kavya will say anything to her.

Later, while Anupamaa is preparing mehndi for Baa, Kavya interrupts her. Though Anupamaa tries to ignore her, she stops her from making mehndi and tells her that it’s her house. Anupamaa tells her that instead of getting the house in her name, she should have tried to make a place in their hearts. Before Kavya could say anything, she finds Vanraj standing there and leaves without saying a word.

In the upcoming episodes we will see that the family organises a pre-wedding photoshoot for Baa and Babuji. Later during the mehndi ceremony they see Anuj and GK at their door. Who invited them? Was it Baa and Babuji? Will Baa apologise to Anuj and GK? To know what happens next, keep watching “Anupamaa”. 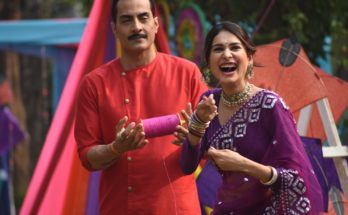