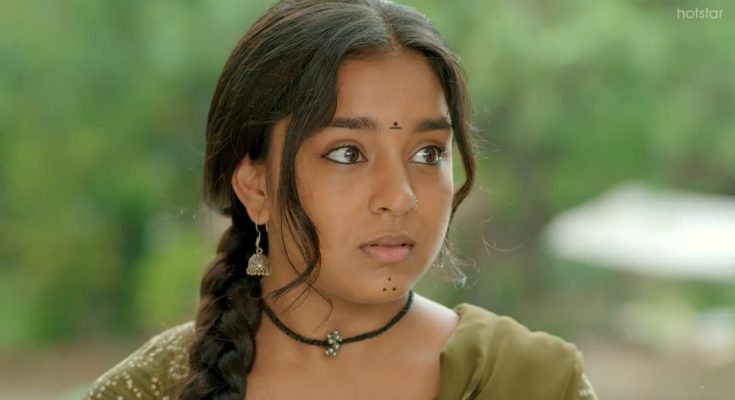 The episode starts with Mithi giving birth to a baby girl. Dulari taunts Mithi for having an Illegitimate child. A lady offers sweets to Dulari, but she throws them and says that the baby girl doesn’t deserve these sweets because of illegitimate. Mithi told Dulari before going anywhere, listen to her baby’s name is Imlie, who is different from others and will dominate others. Dulari said that whether it is Imli or sweets but it is illegitimate.

After 18 years, Imlie has grown up as an adult and shouts that she is coming for the sunrise. Imlie is on her cycle greets everyone, while Malini comes to the office, and everyone greets her. Imlie comes to a wedding where the groom’s member refuse to have a meal on the leaf made plates and starts shouting. Imlie came forward and told them that leaf is pure because it is offered to god.

Everyone starts eating, while Imlie takes Henna to the bride and explains to the bride that she doesn’t want to marry because she wants to go city with her mom and pet. Malini talks to her mom that she wanted to marry Aditya because she knows her for seven years.

Aditya comes to the office and sees everyone’s work, and asks for some tea. Aditya knows about the story by a reporter that he has been tracking, the reporter said it is in Pagdandia. Aditya got an assignment of a village named Pagdandia that he has been waiting for for so long. Dulari came to Mithi, and told her to do some work for Diwali instead of making a doll, and taunts Mithi that if she is her child she will beat her with the slipper. Imlie throws notes from the tree. Dulari said that it’s a fake note. Imlie said that my grandmother is fake, so the notes are fake too. Dulari told Mithi that her daughter Imlie is rude, while Dulari starts beating Mithi and Imlie. Mithi slaps Imlie.

Aditya and Malini choose the same shoes and laughs. Malini told Aditya that she knows him for 7 years. Aditya told Malini that he would marry after coming from Pagdandia. Mithi told Imlie when Imlie marries, she will live with her grandmother. Imlie says her that she doesn’t want to marry.

Aditya on a bike with Malini, and a drop of the waterfall on the face of Imlie and Aditya. Imlie dances in the rain, Henna fell in Imlie’s hand, and she gets panic, where Aparna comes to the kitchen and says Aditya’s Aunt to take rest, where Nidhi comes and, told that she is making face pack, while the phone rings, but Rupali doesn’t receive the call. Rupali’s mother scolds her for not picking her call. Rupali told her mom that she is a burden on her and taunts her mother for being in her home.

Imlie runs to the borewell and washes her hand. Mithi comes and asks her to stop, but Imlie told Mithi that she would win the prize tomorrow and take it with her to the city. Mithi said that she had already dreamed about the city to go with her father, but he couldn’t take with him, and forget her. Mithi remembers her past. Aditya dropped Malini home and said it’s time to go. Malini said, do not go alone, and he will come with someone else. Aditya told Malini that he would never betray her, where Dev comes, and Malini hugs Dev.