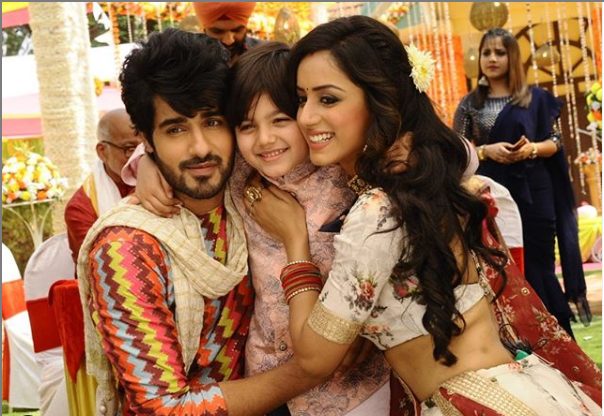 At the beginning of the episode, Rudraksh saw a video on Saransh phone and rushed to Preesha and told her that her praying is fulfilled. Then Rudraksh showed him the video when Kirti was trying to manipulate Rudraksh. And how Rudraksh went from there and Yuvraj came and then after Mishka and at last Shardha was trying to save Kirti. Preesha felt happy and hugged Rudraksh joyfully.

Preesha decided to go and bring Shardha back. Saransh suddenly came and noticed tears in Preesha eyes and asked her why she is crying. Preesha said these tears are of happiness. Then Saransh acknowledges that to see angels, and he has placed his phone on the rooftop as Shardha told her that angels come from the sky in the night.

Rudraksh thanked Saransh and told that he is the biggest angel of God. Rudraksh and preesha went to Balraj to show that video. Neerja regained her conciseness and started asking several questions to Rahul. Then Rahul called Yuvraj and gave him the good news that Neerja regained his consciousness. Yuvraj got frustrated and was thinking about how to mute Neerja as she knew everything and might inform Preesha.

Ahana was offering dessert to Balraj and telling her to keep calm and eat something. Suddenly Rudraksh came there and showed that video to Balraj. Rahul went to Neerja and said sorry to Neerja and said she is paying for his mistakes. Neerja asked Rahul about the pen drive, but Rahul said that he did not find any pen drive. Then Neerja told how she backup the data and was going to show her and meet with an accident.

Rahul told him he would do everything, and he will apologize in front of Preesha and Rudraksh. Neerja said that this time she could not believe her, so she told him to call Preesha and call her now. The lawyer sees the video and told that it would prove that Shardha is innocent. Ahana felt unhappy about this. The lawyer told the next morning he would go to court and bring her bail papers.

Rahul called Preesha and told her to come as soon as possible. Preesha said she was feeling guilty that she was coming to meet her and meet with this accident. Neerja said that she will fix everything now, and now it’s her turn to save her and said Rahul is willing to say something.